Prof. Dr. B. Hammouti was awarded a PhD degree in corrosion science in 1994. He is currently a Professor in the Faculty of Science, University of Mohammed I, Oujda, Morocco. His research interest covers acidity sensors and corrosion inhibition of iron, steel, lead, aluminium and copper in mineral acids by tetrazole, pyrazole, polymer, thiophene, pyridine, peptide, aminoacid and ester compounds. Additionally his research interest is moreover directed towards the field of the pesticides, selective electrodes water treatments. He has published more than 700 papers in corrosion and sensors fields. In last March, 2006, he received the Elsevier Award as the most published author in Morocco since the year 2000.

On July 30, 2015 by His Majesty The King Mohammed VI, decorated Prof. Hammouti of Wissam (Faress) on the occasion of the 16th anniversary of King Mohamed VI's accession to the throne day 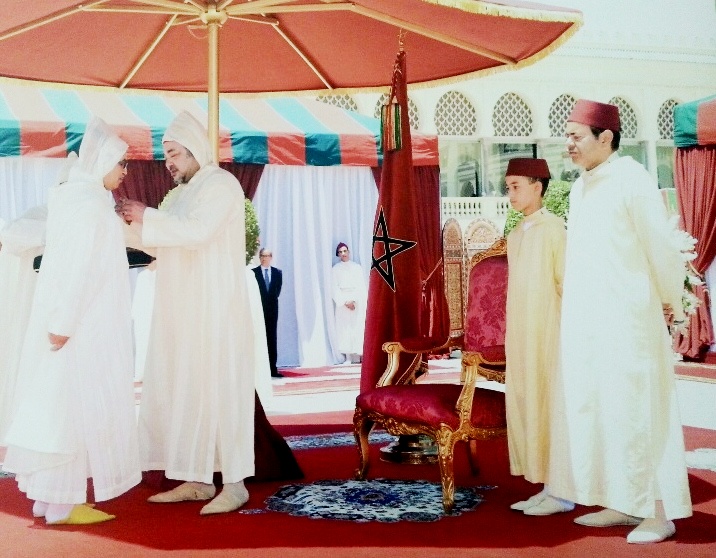 Elsevier Award as the most published author in Morocco since 2000, Hilton, Rabat-Morocco, March, 2006 according to www.scopus.com. The Award was presented to His Majesty the King Mohamed VI during his visit to the University of Mohamed Premier Oujda, in June, 2nd 2011. 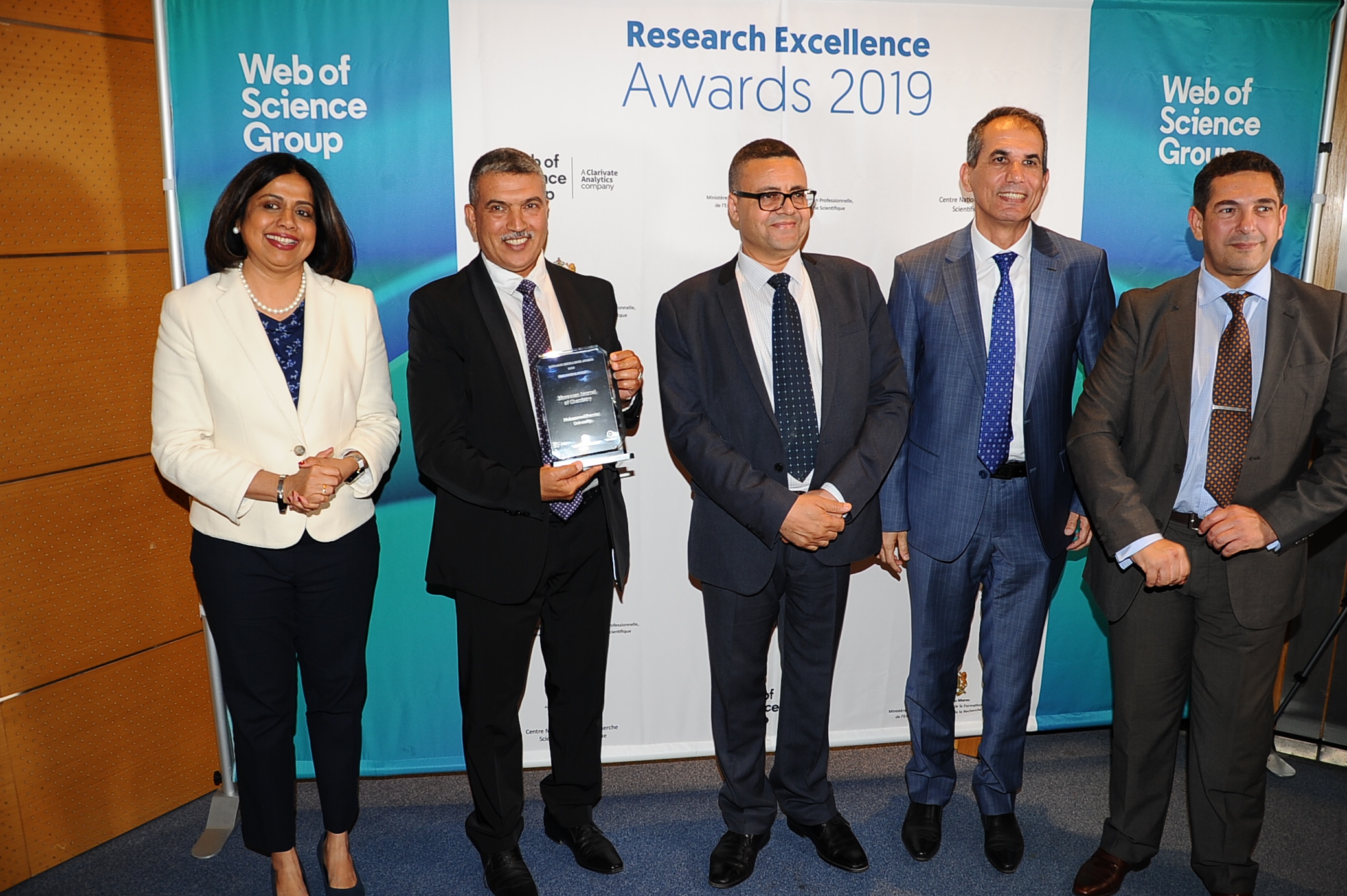 We are honored, as Editor Prof. Chetouani and Editor In Chief (Prof. Hammouti ) by indexation and coverage of Our Moroccan Journal of chemistry in the ISI Web of Science actually named Clarivate in July, 3rd, 2019. The Honorary Ceremony was attended by the Minister of National Education, Vocational Training, Higher Education and Scientific Research, Pr. Said Amzazi , the General Director, Emerging Markets, Clarivate Viji KRISHNAN Analytics of Clarivate and Prof Smaail Radi Dean of Science Faculty, UMP Oujda 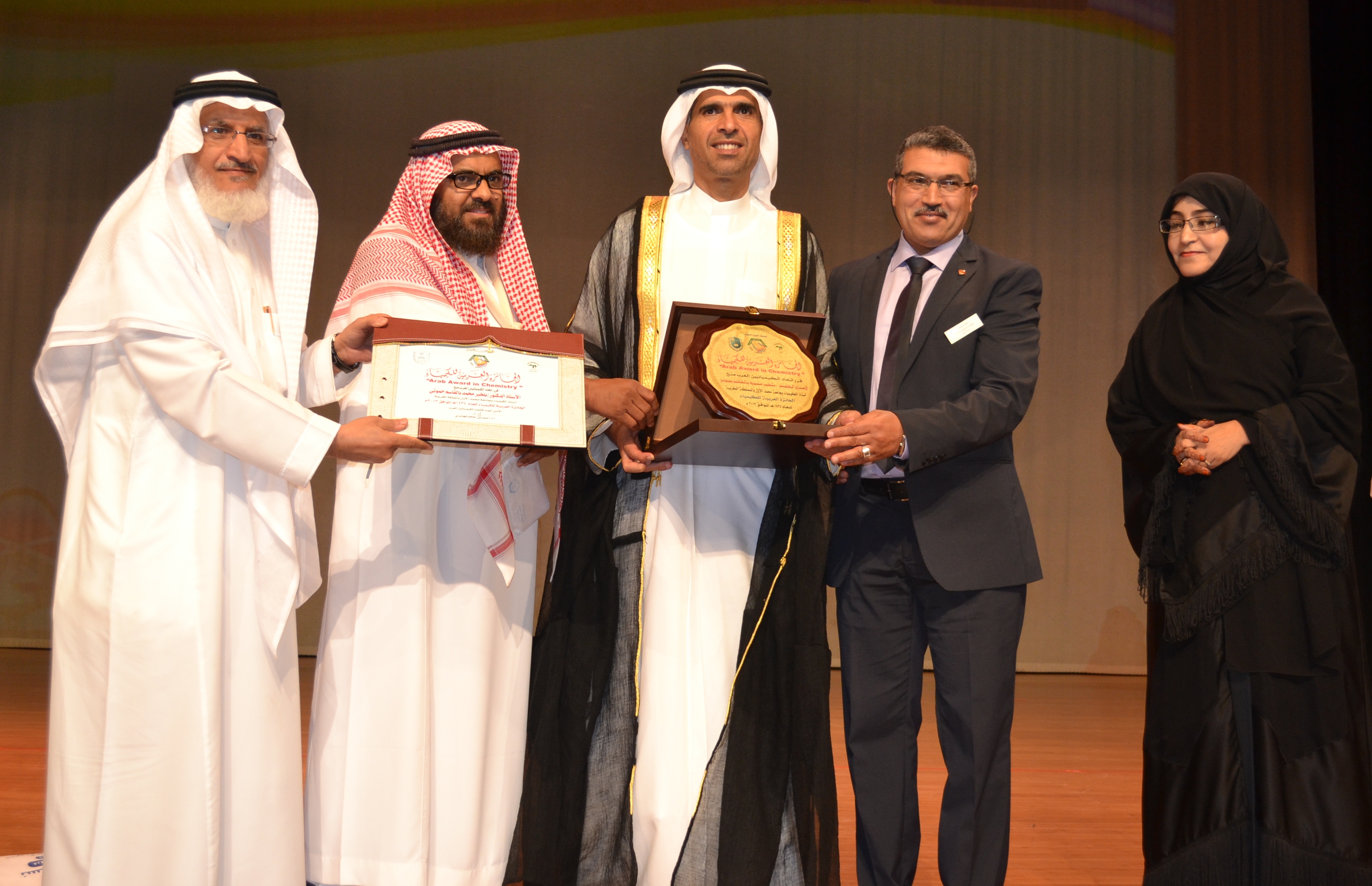 Prof. Hammouti received also the Arab Award in Chemistry 2013. The Award granted by the Union of Arab Chemists in its 32nd meeting in Ras Al Khaimah-Emirates- and funded by the Saudi Chemical Society in April 2013 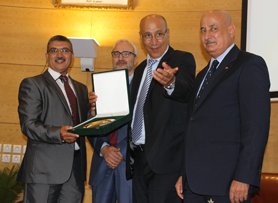 University Mohammed 1er Honoring The University of Mohammed Premier Oujda on Thursday, 10 October 2013 honored Professor Dr. Belkheir Hammouti, during the ceremony on the occasion of the tenth anniversary of the start royal initiative for the development of the eastern provences. The event was organized at the Faculty of Medicine and Pharmacy, Ouja. Belkheir Hammouti, professor of Chemistry and research professor in the faculty Sciences at the University of Mohammed Premier Oujda, received recently the Arabic Award in Chemistry, in April 2013 at Rass al Khaima, Emirates Arab United from the Union of Arabic Chemists and funded by the Saudi Chemical Society. Prof Hammouti received in 2006 the Elsevier-Scopus Award as the most Author published in Morocco since the year 2000. He has contributed greatly to the area of Corrosion Inhibition, sensors and natural products research. He produced more than 700 publications and owns 10 patents related to his research. He is co-author of 4 books. I am grateful to all the researchers who worked with them inside or outside the college in Morocco, the Maghreb or the World. This coronation is the result of fruitful cooperation between researchers in all the continents. Mr. Hammouti, considered the first researcher on Scopus in the field of corrosion & inhibition. 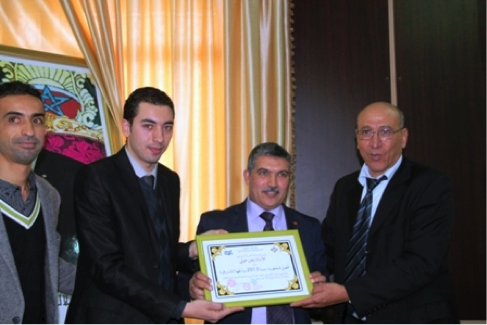 On Saturday 11 January, 2014 Prof. Hammouti was granted the certification of the personality most influential in the East of Morocco in the year 2013. This certification was given to him by the president of the University of Mohammed first who during his speech showed that the University of Mohammed first in Oujda is proud of Prof. Hammoutis scientific achievements and humility. Besides, he considered that voting for Prof Belkheir Hammouti by the visitors of Baouabat Al Maghrib Acharki (www.lmo.ma), is a proof of their pride of science and scientists. Dr Hammouti was selected as the best one within the most famous fourteen political, cultural, religious and sport famous personalities in the East of Morocco. He was able to convince the visitors of Baouabat Al Magrhib Acharki which oganized this public opinion poll during the whole month of December 2013 in co operation with Oriental news paper, the Oriental association of press and media- Oujda, the Beni Znasan association of press and media  Berkane and the institution of KMV of audiovisual media and press, Oujda.

The National School of Applied Sciences at the University of Ibn Zohr honored Dr. Belkheir Hammouti Professor at the University of Mohammed Premier, in Oujda and Dr. Shehdeh Wade Jodeh of An-Najah National University in Palestine, to discuss the impact of their participation in the framing of some theses and a scientific workshop for the benefit of the students and researchers at the University of Ibn Zohr.
Dr. Rachid Salghi proceeded to speak about Hammouti and his brilliance in scientific research and the awards he received and magazines in which he was published. Dr. Bounar, Vice President of the University Ibn Zohr, gave a welcome speech to the audience, emphasizing Hammouti's efforts exerted in the field of scientific research. The Vice President, on behalf of the President of the University, presented an honorary nameplate to Hammouti who is also the most published author in the corrosion inhibition field.
The floor was then given to Dr. Salghi to introduce Dr. Shehdeh Jodeh, who worked for many years for General Motors Corporation and achieved excellence in Applied Chemistry. Dr. Ouakrim Mohammed, Director of the National School of Applied Sciences, presented Dr. Shehdeh with a nameplate and paid tribute to the event, in honor of sciences and excellence.
This event was attended by a group of professors and PhD doctorates, and the family of Dr. Driss Ben Hmamou who was defending his thesis at this day -24 June 2014-.